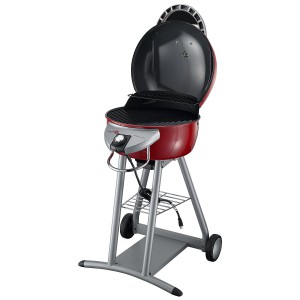 To say the performance of electric grills can be hit or miss is an understatement. With some electric grills, you might as well be throwing your burger on a radiator as you’ll get the same result.

The Char-Broil Patio Bistro Infrared Electric Grill outperforms most electrical grills available today by leveraging their 70+ years of experience manufacturing grills. Starting as the W.C. Bradley Company in the 40’s and eventually changing their name and brand to Char-Broil.

They’ve innovated over the years resulting in a compact electric grill that maintains its temperatures well. Its infrared cooking system results in juicier meat as well. But is it worth a closer look? Find out the pros and cons and you be the judge…

One of the best things about the Char-Broil Patio Bistro Infrared Electric Grill is its design and the many aspects that go into it. The first and most obvious aspect of the design is its size. This grill is one of the best choices if space is limited. It’s ideal for balconies, condo’s, and small patio areas.

Its design also lends its self to portability. With two wheels on the back of the stand and a handle under the temperature controls the Patio Bistro can be easily moved and tucked out of the way so you can make the most of limited space when you’re not grilling.

Lastly, the Patio Bistro wastes no space when it comes to the grilling surface. The porcelain coated premium cooking grates extend to the absolute edge of the grill maximizing an impressive 240 square inch cooking surface.

Char-Broil uses its infrared heating system in most of its grills. By nature, infrared heat works by evenly heating surrounding objects rather than the food itself which tends to dry out food less than traditional convection style grilling.

Good electric grills work well in cold weather, the wind, and rain as their temperature control is maintained digitally. In other words, if the grill’s temperature dips, it will automatically heat itself up rather than having to stoke the coals or turn up the propane.

The removable dial-control plugs into any common 120V power outlet and provides 1750 watts of grilling power which allows the grill to reach temperatures of up to 550 degrees which is pretty good for an electric grill. 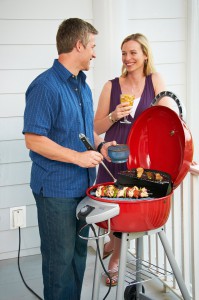 Putting any grill together is one of the worst things one can find on their Saturday afternoon to-do list. Unfortunately, the Char-Broil Patio Bistro is no exception. There are many pieces that need to be bolted screwed and connected. Because it’s smaller it isn’t quite as bad as a monster sized gas grill but none the less, plan on at least a couple of hours and a bit of a headache.

The grill’s sturdiness goes hand and hand with the assembly. Because there are some many individual pieces that need to be connected together, over time the connections can become loose making the grill feel wobbly. Its portability also exasperates the issue. The more the grill gets moved around the greater the likelihood parts become loose adding to the issue.

One last item of note is that this grill should absolutely be covered. Over time, it will rust if it’s not. Do yourself a favor and invest in a cover from day one to keep it from becoming a rust bowl.

We recommend this grill based on its value in the electric grill market. While you can find better-constructed grills that outperform the Patio Bistro you will also pay a lot more. The grill does what it claims and its design complements any outdoor space making the Char-Broil TRU-Infrared Patio Bistro Electric Grill a solid buy for anyone looking for a grill that will work well in a small outdoor space.